With my face primarily back to what I was used to seeing in front of the mirror (see Roaming with Allergies ), I took advantage of the amazing weather to go and explore Ascoli Piceno.

Thankfully the travel to Ascoli Piceno was less hazardous than my attempts to visit Fano and Senigallia.

Whilst out there, I was able to visit three museums and take in the beautiful city — primarily in/around the center. The first one that caught my attention during my research of the city was the Pinacoteca Civica di Ascoli Piceno — The Civic Picture Gallery of Ascoli Piceno.

The Civic Picture Gallery has been around for centuries. Due to the persistence of local artists Giorgio Paci (1820-1914) and Guilio Gabrielli (1832-1910), it was officially inaugurated on August 4, 1861 — according to their booklet.

Like the rest of the city, from the moment you stepped into the courtyard you can practically feel how ancient everything is.

Given how religious most of the older cities within Italy are, I was not surprised to see that many of the artworks referenced the life and death of Jesus Christ —  from the Immaculate Conception to the Crucifixion of Christ. It just so happened that I was visiting Ascoli Piceno on Resurrection Sunday, an important day for Christians as they celebrated the Easter Holiday.

Below is one of the most interesting depictions of Christ that I have seen to date, whether it be painting or sculpture. Upon first sight it is pretty jarring. Perhaps when it was first created it was a sight to behold. However, since beauty is in the eyes of the beholder it probably is still regal to many.

Each room in the Picture Gallery hinted at a past that was filled with aristocrats surrounded by beautiful artifacts, just sipping wine and contemplating the strife of the day. According to their brochure:

The works are displayed in marvellous rooms and a gallery furnished with rare console tables, armchairs, mirrors and chest of drawers dating from the 18th and 19th century that together with precious draperies, curtains and Murano glass chandeliers, recreate the suggestive atmosphere of an aristocratic palace.

As you got to the more contemporary sections of the gallery there were a few self-portraits, and portraits in general, which stood out. Most of the art displayed throughout the Picture Gallery were from local artists, or artists who migrated to Ascoli Piceno at some point in their career. Below are a few that caught my interest.

Of course, some of the pieces caused me to linger and contemplate them longer than others. Every time I studied a piece, I felt like I was a part of that museum scene in Ferris Bueller’s Day Off. 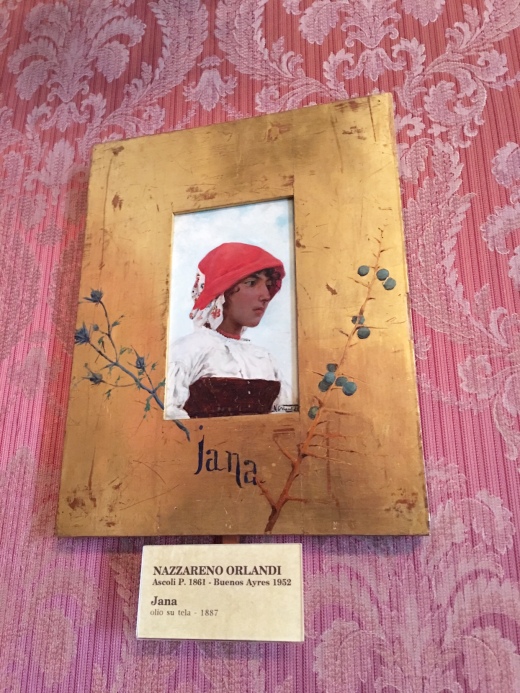 One thing I am always drawn to when viewing portraits are the eyes. I judge these portraits based on how the eyes draw me in, and whether or not it adds life to the piece. After all, the eyes are the windows to the soul.

I do not claim to be an art snob, but I do appreciate the aesthetics and brushwork that resulted from these artists’ vision.

I was pleased with all that The Civic Picture Gallery had to offer. I also checked out their “Cola dell’Amatrice da Pinturicchio a Raffaello” Exhibition, and it did not disappoint.

It was a great introduction to what Ascoli Piceno had to offer.

I was born in Guyana (South America), and moved to Brooklyn, New York just shy of becoming a teenager. Though Brooklyn was my home for more than half of my life, my heart remained in Guyana. Talk about being torn in two! I think I was bitten by the Wanderlust Bug at a young age. Too broke to travel, I read instead. And you know what they say about reading? (They say a lot of things so any quote you choose may work for this purpose). Due to an unhealthy obsession with books, I developed a passion for writing & telling stories. I like my writings most times. Currently, I call Italy home. Whilst here in Europe, I hope to explore and write as much as I can. Please feel free to stick around for the journey -- or if you have something better to do perhaps bookmark me and return later? Come for the photos, and stay for the words. R.K View all posts by roamingkitty58